Living and Learning with Faith, Friendship and Fun 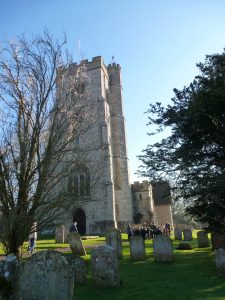 The beautiful church of St. Peter and St. Paul, Charing, stands in the middle of the village adjacent to the remains of the Archbishop’s Palace, both dating from 12th century. The Palace was used as a resting place for various archbishops as they travelled between Canterbury and London. Much of the original part of the church building was destroyed in a fire in the late 16th Century but was quickly restored by the goodwill of the people of Charing. Local legend has it that the block on which John the Baptist was beheaded was brought to England during the reign of Richard 1st and kept in Charing Church.

Charing Church is now one of the seven churches of the G7 Benefice all of which are served by one ministry team led by the Rector The Rev. Canon Sheila Cox.

The Church always welcomes pupils and staff from the Primary School for services at the beginning and end of each term. Classes visit the church to enhance the teaching and learning of subjects such as Baptism, Communion, Church Vestments and to understand more about the Christian narrative by learning about the building and the life of the church.

The Rector and members of the Ministry Leadership Team are frequent visitors in the school, leading Collective Worship, serving on the Board of Governors and generally taking an interest in the life and work of the school.